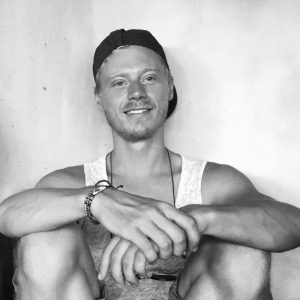 After completing fine-art School in 2010 Basto earned a bachelor in Design. During his last educational year in university he started collaborating with Tim Boin and they started Sober Industries. The goal was to earn money by doing commissioned projects and use this income to facilitate autonomous art projects. In the beginning it was tough to make enough to actually have the privilege to take time to do non commissioned projects. But after a couple of months one of these projects meant the kick-start they needed. The applications rolled in and suddenly time was becoming the problem instead.

During the following years Sober Industries with both Basto and Tim as Art-directors worked for national and international companies in a wide variance of projects. Varying from one of a kind marketing tools like Ziggohome and the Feed Me ‘With Teeth’ stage show to the yearly stage design and hosting on Solar Weekend Festival, and all sorts of projects in between.

During these years Basto transformed from a perky art student schooled in illustration and graphic design to an all-round art-director, client manager and producer. Most of the projects done with Sober Industries were from one end to the other worked out by them. Starting with client meetings, brainstorms, creative concept development and account managing up until fabrication and delivery. Only if needed they hired third parties to accompany them in the process.

Working this way Basto developed an extended knowledge of a lot of aspects inside the creative business. At least the basis of most used creative software tools are known. Ranging from the adobe creative suit to animation and editing software and even 3D design tools and VJ programs are covered. The numerous kinds of materials that have been used to fabricate projects. All the standard building materials like wood and metals but also assembly of electronics like LED screens.

But maybe more important, Basto met a lot of people in a wide variance of positions. And he always knows how to act, react and interact with all these personalities. The CEO of a multinational or the floor-manager in a venue he always gets along with everybody. This social skill is one of his best characteristics. Especially working in groups trying to accomplish the ultimate outcome of each project.

At the start of 2016 Basto felt the need to separate himself from Sober Industries to see what else is out there. Since then he works as a freelance art-director. Doing a variety of projects both commissioned and autonomous. Always ready for the next challenge and eager to be part of the next mind boggling project.